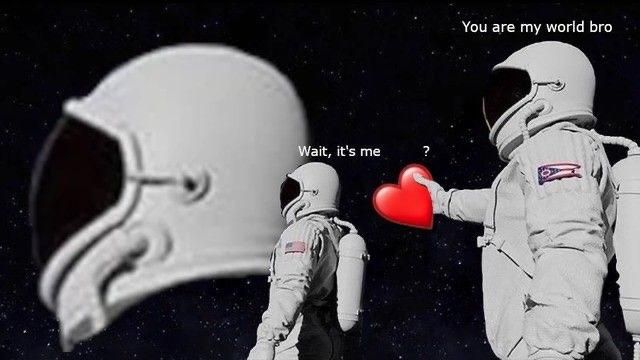 Memes are constantly u[grading and each time a new meme comes up, people make it viral instantly by constantly making newer, fresher content on those memes and templates. One such huge hit meme was the ‘Wait, it’s all X’ meme where the meme fandom just loved this and was viral for 2 years. Let us know more about this meme

MEME ORIGINS: Wait Its All Meme

The origins of this meme trace back to December of 2016, when the user of Reddit Wiegand6 posted a MS Paint illustration of two floating astronauts in space looking at the earth. One astronaut says “Wtf, it’s flat?”, the astronaut behind him, with a gun pointing to his fellow astronaut says ” Sry fam”. That post was moderately popular with just 97% upvoted yet it took 4 years to get trending.

MEME BACKHISTORY: Wait Its All Meme

The meme started getting viral again in 2018 when one of the users simplified the version of this meme, by the same template but this time, the earth shown is round and the two astronauts floating were constant. This time the first astronaut says “Wait, it’s all America?” looking at the Earth where all the countries are shown in american flag colours. The second astronaut behind him, with a gun pointing at him, says ” always has been”. This started the spread of this legendary meme where thje peplelater started soing their own versions of memes on MS Word until one user, shared the more simplistic and realistic template with real life earth, and the two astronauts being edited with photoshop and the second astronaut’s hand, holding the gun was edited through photoshop. The same context, but different messages, words and sentences and various people started the meme trend which is still famous and popular.

MEME POPULARITY: Wait Its All Meme

This meme was instantly viral in the year 2018, afterwards, people just used the same template but with different messages and the conversations between the astronauts, the sarcastic touch and people’s creativity poured fuel to the fire torched on the social media. Especially reddit, facebook and twitter were bombarded with these memes. People loved them and they just used to share it, make it and laugh around it without any controversies.

The memes were supposed to be funny and this meme trend started with a sarcastic note, and is going pretty well with the sarcasm touch. People have never missed any celebrity’s face as the astronauts shown in the pic were just wearing helmets, hence there was no case of misuse of name and fame. People, although shown and depicted this meme with guns, didn’t encourage violence or harshness among the crowd, as guns were just shown for the surprise element by the second astronaut to the first astronaut who has no idea what’s happening behind his back. This meme made a huge name in the year 2018 till 2019, but yet has a significant amount of fan base and they do once in a while, appear among the social media meme pages and communities.